January 13, 2014
Until a few years back, manufacturing typically featured huge shop floors with people manning gigantic machines spitting out numerous identical parts which were carried to other parts of the factory on conveyer belts for assembling before churning out a final product. Most of these mass production units were located in Western countries or some manufacturing clusters in China and Hong Kong. The global conglomerates situated in the developed countries kept the sophisticated and critical functions such as research and product design in the domestic territories while outsourced the mass production of parts to cheaper countries. However, the advent of digital technology and development of Asian economies is changing the scenario in the manufacturing world. 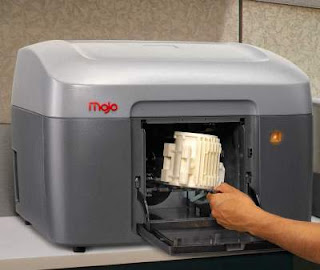 The advent of  digital technology is completly changed face of modern world. The omnipresent technology is touching our lives in most innovative ways. It is being incorporated in all sectors such as education, entertainment, healthcare, infrastructure and transport. Manufacturing is undergoing a complete makeover using digital technology. Additive manufacturing using 3D printers is not only making the process simpler, cheaper and faster but it is also enabling innovation and invention like never before. Additive manufacturing also known as 3D printing, rapid prototyping, layer manufacturing and additive fabrication is defined by ASTM F42 (committee for standardizing terminology and defining industry standards) as “the process of joining materials to make objects from 3D model data, usually layer upon layer, as opposed to subtractive manufacturing technologies.” The process involves spraying thin layers of liquid or powdered material using 3D printers to form a prototype or many objects. The technology has been able to successfully develop varied things from dental fixtures to parts of jet engines. One of the latest technologies of AM, layer sintering, uses laser beam to fuse material with platform built with thin layers of metallic powder. This technology can be used for a variety of metals including aerospace-grade titanium (The Economist, 2012). Additive manufacturing is being incorporated worldwide to produce many products which were being produced using conventional manufacturing processes till now. Some of the advantages of addictive manufacturing or rapid prototyping that make the future of manufacturing promising and changing the way manufacturing is being changed are listed below:
Since additive technology uses layering material in a predefined manner, it reduces the use of raw material unlike conventional manufacturing where a block of metal is cut away to produce a specific shape thus wasting some of it. It also reduces the need of raw material in support structures required in traditional machining and casting processes. Reduced quantities of raw material make a significant cost difference while working with valuable metals such as titanium (Reeves, n.d.).

Using topological optimization algorithms or lattice structures, AM can create components with near perfect strength to weight ratios. Such precisions in weight are important for designing non-structural parts for aircrafts (Reeves, n.d).

Additive manufacturing gives the freedom of customization and complexity unlike standard manufacturing processes. Since customizing only requires some change in the software program, it becomes easier to customize every part to a close precision. AM also enables making fully functional moving parts such as joints and couplings (RAPDASA, 2013).

Along with the many advantages of the technology, there are certain challenges associated with it. Mass production and creating large components is still not very easy using additive manufacturing. In spite of the challenges involved in the process, AM is significantly changing the way manufacturing is done. Along with many changes happening in the process, AM also promises that the next few decades will churn out numerous useful inventions owing to this new technology.