Book Review - When She Smiled 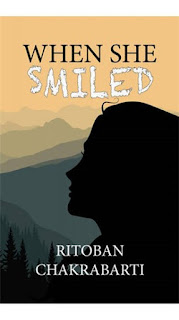 
Mritunjay Roy who has come back to his school in Shimla after spending 2 years in Sainik School falls head over heels for this exceptionally pretty girl, Akanksha. He befriends her and spends as much time with her as possible in school and tuition. Roy is completely smitten by her and Akanksha also seems to like Roy’s company. He writes poetry for her, buys her whatever is possible with his meager pocketmoney and grabs every opportunity to spend time with her. Everything seems to be going fine when Akanksha starts behaving weird and ignores Roy. All of Roy’s efforts go in vain as she doesn’t even seem to notice his presence. Raj, Roy’s loyal companion, puts some sense into him and brings him back from state of desolation and desperation.  Heartbroken Roy is shattered initially but takes control and leads himself to a better and rewarding life away from Akanksha.

“When She Smiled” is a simple story of teenage infatuation and heartaches. It reminds you of all the Bollywood movies with the same mushy story line. Even the title and the cover page hinted towards a sappy romantic tale. Most of the story is pretty predictable as almost every one of us has either gone through this phase or has witnessed our friends go through it. All the characters of Roy’s school seem like they were picked from our school. Anybody past that age will sit back and smile upon the phase where small issues meant life and death. Author’s description of Roy’s father as a strict disciplinarian is very apt for Dads of that era when cars, mobile phones and restaurants were considered luxury and Rs 50 for a School Picnic was considered more than enough. Sid is the coolest big brother anybody could wish for and Ashima, Roy’s elder sister, sounds like fun to be with. Ashima’s death in a bus accident at the end of the story, however, was a blow and the only unpredictable twist in the plot.

Written in a simple language with a generous dose of “freaking” and “Ram’s sakes”, the book can appeal to the younger lot of Mills & Boon reading club. It is the author’s maiden attempt at book writing and the scope of improvement is huge. However, if there is something that scores brilliantly in the plot, it is author’s splendid description of Shimla and Shivalik Hills. The reader is almost transported to the picturesque locations of the snow laden hills. Another positive about the story line is die hard optimism of Mritunjay Roy who faces all failures and personal losses and emerges strong out of all situations. I also liked the ending where “when she smiled” finally makes sense and shows him direction.

Though this book would not find a place on my list of great writings, it certainly qualifies as a light laid back read which could be finished in two sittings. And 1.5 out of 5 stars is what “when she smiled” gets from me.

About the Author: Ritoban is an entrepreneur, author, internet marketer, and bathroom singer. He ran an internet marketing company for five years, before trying his hand at writing. His first novel, “When She Smiled “, a coming-of-age fiction released in 2014. He is a freedom fanatic and an avid traveler, and believes in a life without boundaries.
book reviews