- September 18, 2015
Though Ganesh Chaturthi always held huge importance in Hindu calendar, its widespread popularity can be accredited to Lokmanya Bal Gangadhar Tilak. The valiant freedom fighter turned this domestic festival into a public celebration in 1893 with an intention to bring people together and garner support for freedom movement. However, Sarvajanik Ganesh Utsav which was meant to bring people together and alleviate all communal discrimination has turned into a foul display of power and authority in the recent years along with having bizarre effects on the ecosystem. Every corner in every city has a different Ganapati, each one trying to belittle the next one with a bigger idol and over-pretentious decorations. Blocked roads and electricity theft become flavor of the season. Irrelevant obscene songs from the blaring loud speakers make everyone cringe in disgust and discomfort. Well, it would be unfair to say that purity of the festival is completely lost. There still are communities and groups where Ganesh Utsav means traditional celebrations without hampering the peace and tranquility of the society but yes, they are rare. 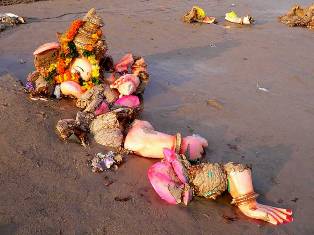 The aftermath of the festival is all the more horrifying. The filth lying around the Ganesh pandals makes the streets unbearable. And what happens to the idols is just heart-breaking for me. These are immersed in water bodies but since most of these idols are made of plaster of paris, they do not dissolve. It’s really heart-breaking to see my favorite deity left to rot in filthy waters. It makes me think if that Ganesh idol (and Maa Durga, who undergoes the same treatment during Durga Puja) would actually want to come to stay with us next year.

Well, not everything is as gloomy as I have pictured it here. People have started realizing the harmful impact of such celebrations on the environment and community. More and more awareness is being spread about alternatives to age-old customs which need re-adjustment to the current ecological needs. It’s also heartening to see the younger generation embracing traditions with a progressive and sustainable approach. And I am sure, the God of wisdom, Ganesh, will lead us to a future full of prosperity and benevolence.

Like what you just read? How about a pat on the back by leaving a comment! Don't agree with my line of thought? Let me know that too..