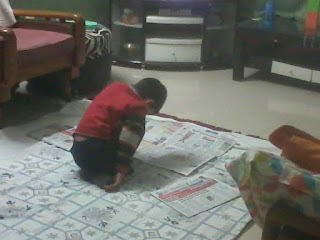 I could almost feel tears of pride in the corner of my eyes when my 7 year old kid woke up yesterday morning and asked for the newspaper. So he has finally picked up the good habit, I thought. I handed him the paper and looked at him lovingly as he scanned the newspapers for “something”. And then, “oh no”, he exclaimed loudly. Maggi is UNSAFE was what he read. And that's when it hit me, he was worried about Maggi’s future!

The recent furor over Maggi has validated the fear of so many mothers like me. We didn’t know anything about MSG till now but we were sure that there was something wrong with this 2-minute snack. And every time we surrendered to the kids’ demand for Maggi, there was a tiny bit of guilt about it which led to us to cook something super-nutritious and make up for the “damage”. Though Maggi was “born” in India around the same time our generation of “young mothers” was born, I don’t remember myself or my friends having Maggi. Once in six months may be. Our lunchboxes mostly contained parathas, pohas and upmas. The lunchboxes have undergone phenomenal changes over the last three decades. Parathas have been replaced by sandwiches and every fourth lunchbox has some variant of Maggi (and that’s where my son tasted his first Maggi). The times have changed a lot. Mothers have taken up more responsibilities and some fathers have also found their way to the kitchen. Maggi has full marks for being convenient and hassle free, and is a savior for those instant food cravings. Also, as more and more kids and young adults stay away from their homes for various reasons, nothing comes more handy as affordable  2-minutes Maggi (by the way, does it really cook in 2-minutes. Mine never took less than 5-mins). It’s just understandable that Maggi takes up more and more shelf space in our kitchens.

But what about MSG? Now that it has been proved scientifically that there is “something” wrong about the instant noodle, will it be the same again for Maggi. Even if it gets a clean chit from the authorities, how many kitchens will welcome Maggi with open arms? And even if they do, it will always get ugly stares from neighboring apples and laddoos . Will we be able to put some more MSG(and probably some lead too)  in our kids and families? But I say, why only Maggi. Why not get all others from the instant-noodle rack tested. And while we are at it, let’s make Lays, Kurkure, Crax also pay a visit to the lab. I mean we could at least learn a new scientific term if nothing else.

But seriously, when will the authorities and companies start taking us seriously. I guess around the same time we take ourselves seriously. I know my kitchen has become Maggi-less and no MSG is going into my kid henceforth. What about your kitchen?

Like what you just read? How about a pat on the back by leaving a comment. Don't agree with my thoughts. Let me know that too......