The BestSeller She Wrote- Book Review 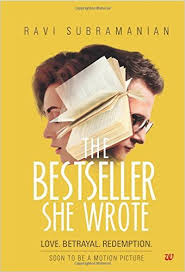 Ravi Subramanian has been in my favorite authors list for very long. And with The Best Seller She Wrote, he just managed to bag a lifetime membership there. Though The BestSeller She Wrote was significantly different from his earlier works in terms of plot and mildly predictable at certain points, it does not miss the thrill, the twists and superlative storytelling which are Subramanian’s trademark. There is also an uncanny similarity between the lead character and famed author Chetan Bhagat. At some point during the first few pages, I had to stop and check that I wasn’t reading his bio. However, the character developed on its own as the story progressed.

Aditya, is a successful banker and an illustrious author. He has had a near perfect personal and professional life till Shreya Kaushik comes into picture. This vibrant, aggressive and aspiring author initially criticizes Aditya for considering books as product that need to be marketed. Later on, she falls in love(?) with the banker cum author. Now the feeling mentioned here is genuine or derived out of the prospective benefits that this relationship could bring to Shreya is for the reader to decide. Aditya, completely in awe of Shreya’s youth and beauty finds himself falling for her almost instantly.  The thrill of this illicit relationship soon overtakes the guilt of cheating on his wife. The story takes amazing turns as the manipulative character of Shreya slowly over-shadows Aditya’s life so much that he risks everything. The turning point was where you find out that it was someone else who was playing the master here and cashing in on the vulnerabilities of Shreya, Aditya and his wife. This twist was the high point of the plot.

The BestSeller She Wrote for me was a notch lesser than any of his older works. At many points I felt that the story was highly predictable. Now this may also be due to the reason that when you read an author over and over again, you start thinking on the same lines. But all credit to the author to maintain the thrill and brownie points for the pace at which the story gushes forward. Love,betrayal, redemption at its best.

I think that I as reader I have come at a level where I prefer profound and meaningful books rather than thrillers. But I confess here unabashedly that I will never be too old for Ravi Subramanian’s works.

About the Author:- Ravi Subramanian, an alumnus of IIM Bengaluru, has spent two decades working his way up the ladder of power in the amazingly exciting and adrenaline-pumping world of global banks in India. For Ravi, The Bestseller She Wrote, marks the beginning of a new chapter in his writing. A significant departure from his usual fare, this is Ravi’s first book on romantic intrigue. He is the award winning author of seven bestselling books :


I am reviewing ˜The Bestseller She Wrote™ by Ravi Subramanian as a part of the biggest Book Review Program for Indian Bloggers. Participate now to get free books!

Like what you just read? How about a pat on the back by leaving a comment! Don't agree with my line of thought? Let me know that too..