Cost of a War 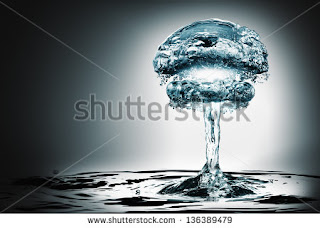 As the vengeful calls for War on the TV screen cross the bearable decibels, I switch off the television and go back to my reading. But that uproar has penetrated so deep in my mind that I am not able to “switch it off”. And it makes me think about the cost of a war - the cost that most of us, fortunately, have not paid in our lives and hence don’t realize the impact of it.

War, by its very nature, is brutal, unforgiving and absolutely unbiased. Its brutality may not be confined to the war-front. It percolates through every strata of the society and makes is barren. The war is unforgiving and unbiased for it will make you pay for your choice. And everybody pays- your children, your family, the sick and the disabled, even the unborn. Yes, even the generations which are not around when we chose war will pay the price. Repercussions of war destroy the society and the places that we call home. The societies that took ages and efforts to build will be destroyed in an instant. Ask the people who face war and witness their homes being turned to rubble. The children who do not even understand the meaning of war suffer the inhumane ramifications of war forced upon them. War might be triggered by one of the participants but it cannot be called off similarly. Since it is dynamic, it will go on till it is fueled by even a single partaker. You cannot stop a war only because you have had enough. Even the socio-economic impact will push the society back by a few tens or hundreds of years.

Even a soldier knows that war is the last resort. It is way too easy to call for a war from the comforts of our homes. But on the war-front, there is no remote control to switch it off once the battle begins. The war will rightfully claim all it can. You may be lucky if a mortar did not hit your house, because there was a soldier who took that bullet for you. But his home might not be the same after the war. It will long for a father or a son who lost his life in the war. That soldier may not think twice before laying his life guarding the borders, but he also knows that war comes with a hefty price tag. So when you demand that he goes out there and battles for his countrymen, he expects you to acknowledge that war is all encompassing. Even if you don’t go out to war, it will come to you and claim its cost.

Don’t question my patriotism too soon. I too become furious when somebody harms my country and perceives my sensibility as my incapability. But I also realize that I am fortunate enough to be able to vent out my anger and brag about my patriotism on the social media and not required to go out on an actual battlefield. A war, however, may change all that. It will rob you of all the comforts and expose you to the ruthlessness. Your friends and family who enthusiastically support you in your call of war on the social media will witness the naked inhumaneness of war. The helplessness will break your courage and your patriotism will go for a toss when you have to struggle for primal survival. Bare ruthlessness is the cost that war claims.

So next time when your adrenaline rush goes over the roof and you want to teach them a lesson by going out to war; bear in mind that its effect will penetrate beyond both borders. We are fortunate to have people in decision-making positions who are aware of the cost of war. They acknowledge that a war today will be fought be arms and ammunitions that will have unprecedented and irreparable damage to humanity. They are sensible enough to realize that they have a larger answerability to the future than forcing a war upon them. And I am sure that they will teach a fitting lesson to the perpetrators but will also make sure that our country and humanity does not have to bear the unimaginable cost of war.

April 10, 2020
The pandemic has forced us all within our houses. You post a picture of your happy family having fun at home on social media. After all, if it hadn’t been for the duress, every member of the family would have had their own schedules and hardly any time for each other. The situation has brought the family together and you want to cherish every moment of it. So you post another picture. And then you scroll down.
Post a Comment
Read more

September 14, 2018
10th October 2018 will add one more remarkable name to the glamorous list of Bollywood celebrities turned authors. Shweta Bachchan Nanda brings to us a hilarious but moving tale of quirky residents of Paradise Towers. As the bookworms impatiently wait for its launch on her dad’s birthday , it has already gained some rave reviews from some well-known names of Bollywood. Coming from one of the most talented lineage of the industry, Shweta Bachchan Nanda promises a lot to the literary ecosphere. And while we will have to wait till 10th October to get our copy of Paradise Towers, Writersmelon have provided us the cover of the book to reveal on Kolorpencil to contain our excitement for now.
Post a Comment
Read more