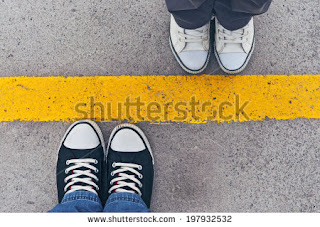 I guess meeting people by chance is actually not by chance. It’s all pre-written in our destiny. Usually, my daily routine is a bit boring. Today, in the morning, while adjusting my earpiece, I heard a voice asking me “Is there any long park to jog around? About 1 km long?” Initially, I thought it was a voice coming out of my mobile? Puzzled I looked around to see a lady dressed in all black talking to me.
I smiled at her and showed her the direction to the adjoining park surrounding the block. “But the kind of park you are looking for is a bit far from here. I usually go in the car when I have to go to that park. And on weekdays I go to this nearer park as I have to be back on time and get my son ready for his playschool.” I told her. We started walking together and I pointed her to the park where I walk daily. She preferred walking with me instead of going to other parks. We walked some steps, when I thought to take her to the far away park she was searching for. “Come I will take you to that park,”
I assured her. “Oh Really? Are you sure?” Her eyes gleamed with excitement.

She had rented an apartment in the block next to mine but was searching for another one that had a huge park around to save time while commuting. She was living alone here and her husband used to accompany her on weekends. She was preparing for a marathon and for that she needed to jog daily. We walked our way to the park while talking about our whereabouts. Her work was more of travelling, she explained.

Usually, I don’t talk to strangers and I am too very selective while making friends. But I was intrigued by her personality. I wanted to know more about her. She was independently working and serving the society. She said that morning time was her thinking time, scheduling her day ahead. It was something I also do. We both had same views about watching television and there were many other similarities between us. Sometimes you talk to new people more comfortably than the known faces. Maybe because you don’t fear they will judge you or they will pass on your opinion to the whole society. I don’t know why I was revealing my details to her and sharing her daily schedule. But there was something about her that was making me talk to her more. She was not a stranger to me anymore. We both had different lifestyles, different approaches for same things and maybe, that was the reason we wanted to talk more and learn from each other’s experiences. Now it was my time to go back. We exchanged numbers and walked back to our respective lives again. I felt like I have come back from some other world where everything was the same except the company. Maybe destiny has stored many more beautiful surprises for me.

Author Bio: Geethica’s writings are reflections of her views towards life. She believes

that whatever happens ,happens for a reason. And the best happens when it is not expected. Because holding on believes that there is a past; letting go ensures that there is a future. Her piece of work gives her a second chance that life denies.
Her words help her build her character each and every day. She reads new articles every day and tries to learn something from them. And she also strives to write regularly. All the visuals that happen around her stimulate her thoughts which she likes to pen down as beautifully as possible.
Check out her virtual destination geethicamehra.blogspot.com
Get in touch with her :Twitter- @Geethica2 ; Facebook handle: geethicageet@yahoo.co.in