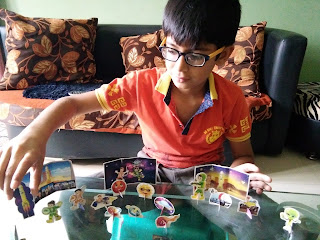 #ColgateMagicalStories is an interesting way to engage your kids this summer. Colgate Toothpaste pack can have characters from any one of these space adventure sets  - Alien Planet, Space Launch and Space Walk which could be cut out to play and learn. A fun way to stimulate the creativity of those little minds……you can’t imagine what comes out.

Raj and Rohini had been working tirelessly on this project for last two years. Finally the day for the launch has arrived. Vista 1, the indigenously built rocket, was ready to take-off from ISRO’s space station in Sriharikota. Whole team was excited for the launch. Raj and Rohini wore their space suits which weigh 127kg and had 13 layers but it helped them survive outside the Earth’s atmosphere. The countdown for the launch began-10,9,8……Raj and Rohini closed their eyes for a moment and said a silent prayer…..3,2,1. BOOM….whoooosshhh…up went the space shuttle. And after a few minute it became invisible in the sky but Raj and Rohini could still speak with their team on the ground through their computers and special radios sets.

They could now see the Earth far below them. It looked beautiful and blue. Earth’s two closest neighbours, Venus and Mars also looked wonderful from up here. And Sun looked all the more bright and orange. Raj and Rohini steered their space shuttle towards the moon. Whooosh…..something flew past them. And again….whoosh. A brigade of comets was coming right towards them. A comet which is made up of ice and dust, could damage their shuttle so Raj took a sharp right turn and came out of the path of comets. “Now we will have to take a longer route to the moon”, Rohini said. And suddenly they heard a strange voice coming from engines. Raj peeked out of the left widow and saw smoke coming out from the engines. “We are hit by a comet, Rohini. We have to fix the engines”, said Raj. He continued, “I don’t think we can continue further. Let us land on this planet”, he said pointing towards the small planet. “But we don’t know anything about this planet. It is not even counted as a planet in our solar system”, Rohini said worriedly. “Rohini, we don’t have much time. I know this planet is not yet recognized as a planet by our scientists but they have found that it has all the necessary elements. We have no choice. We will take off as soon as we fix the engines.”

Raj and Rohini quickly charged their Rover and sent it out to fix the engine. It took only a few minutes for Rover to repair the damage. Raj commanded the Rover to come back to the shuttle so that they could take off. But it didn’t respond. Raj tried again…still, no response. “Raj, look”, Rohini screamed looking out of the window. Both of them could not believe what they saw. There was a small green creature standing atop the Rover. It sent out some electric waves towards the Rover and slowly the Rover started moving away from the shuttle. Raj and Rohini were dumbstruck. They were looking at a real alien. They realized that they had landed on an alien planet. “Raj, let’s take off immediately. I think the creature will come back for this shuttle”, Rohini said. “Yes, let’s go. I don’t think we will get our Rover back”, Raj agreed and they took off. 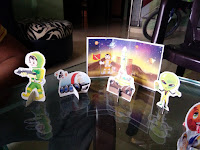 “Ground team Vista, we will have to abort this mission”, Raj radioed to the ground team. “Raj, we also see some malfunction in your systems. Its best that you abort the mission and come back to Earth. But it is unfortunate that this mission has not been successful”, team leader radioed back to Raj. “No sir, this mission has not failed. We have proof of an alien planet very close to Earth. And we can use this information to protect our planet from any alien attack”, Rohini said excitedly. “That’s amazing Raj and Rohini. Come back and tell us more about it”, Team leader said.

Raj and Rohini came back to the space station safely and described everything they saw on the alien planet. The information was immediately shared with all the space research organizations across the world and all of them decided to work together on this information.

I am  blogging my #ColgateMagicalstories at BlogAdda in association with Colgate.
parenting