Looking Into the Sun- Soon to be a motion Picture

- April 14, 2017
Looking Into the Sun will soon be a motion picture. Sincerest thanks to the author, Todd Tavolazzi,  for sharing details about the project and highlighting  the cause. 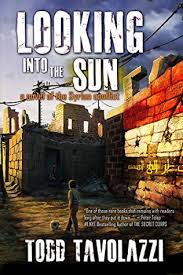 “Small battles are won and lost every day by all sides. But the consistent losers are the people of Syria who must live, sacrifice and die in the horror created by people who claim to be fighting for their best interests.”

Looking into the Sun is war-fiction based on Syrian civil war. Todd Tavalozzi’s maiden attempt, this book has already been acknowledged as one of the best works in the genre` and will soon be a Hollywood motion picture. There are multiple reasons why I liked the book and read it in just 2 sittings.

War-fiction has always intrigued me. It saddens me deeply to see innocent men, women and children paying the cost of war forced upon them in the name of religion, politics or power. Syria is probably one of the deadliest civil wars of this century that unfortunately remained away from the global limelight in the initial years. It was only recently that Syrian conflict got the attention that it deserves.

Looking into the Sun takes a deep dive into the Syrian crisis to derive the most authentic emotions. While the locations and problems are picked from reality, most of the characters are generously inspired from real life. This fiction depicts facts in a brilliant way.

I approached the author of the book, Todd Tavolazzi almost a year back for an interview
(Interview- Todd Tavolazzi- Author of Best Selling book "Looking into the Sun"). He shared some wonderful insights about the book and the cause.


Looking into the Sun is soon going to be a motion picture named The Last Rescue and once again Todd has generously agreed to share the journey of turning this amazing book into a movie. So this is what Todd has to say :

I was fortunate enough to have a wonderful, like-minded, producer, Mr. Eric J. Adams from Sleeperwave Films, option the film rights to my novel of the Syrian conflict, LOOKING INTO THE SUN in August 2016.

Since then, I have been working closely with him to develop the screenplay I adapted from the novel into as compelling of a story as we can tell on the screen. As any writer knows, a novel is very different from a film and the style and structure difference between a novel and a screenplay could not be farther apart.

But the process was very educational and enjoyable as I took the heart of the story I wrote in LOOKING INTO THE SUN and adapted it through my mind's eye into screenplay form in what now is a script, titled, THE LAST RESCUE.

Eric thought that the main character should also be changed a bit in demographics to be a journalist of Middle Eastern heritage. We discussed this idea at length and both came to the conclusion that it served the greater theme of the story if a person of Middle Eastern heritage was responsible for the heroic rescue of Syrian children. I liked the idea that with that element firmly in place, the film would not be susceptible to the criticism of suggesting that it was only white westerners that could solve problems in the Middle East (I think the falsity of this notion can be agreed upon from East to West).

I re-wrote the script with the main story intact - but the seasoned journalist migrated from the seasoned white journalist to a seasoned Lebanese-American journalist with a deep personal link to the region and its people. This character was even more juxtaposed with the Hollywood movie star - which worked well.

This character shift also allowed us to look for indigenous talent for our co-lead - and Eric Adams found a fine Syrian actor named Mohab Alshocough who is currently in a refugee camp in Greece. We have NGO volunteers working to get him a copy of the script to, hopefully, entice him to agree to play the part for us - which I believe would go a long way to show, that despite the popular recent opinion, not all of the western world is ignoring the Syrian plight.

We also shared our project with a renown Egyptian director - who I can't name yet until he has formally agreed to attach himself as director - but, if he does agree - we are excited to have a director who can bring Middle Eastern legitimacy to our project. It will no longer be a film from a purely western perspective.

These are all exciting steps forward, but the most important for keeping this dream alive - is funding. We are actively applying for grants and always on the look out for investors who may be willing to put money toward a deeply important cause. With a budget in the several million dollar range - finding the right financiers who are interested in the cause and want to see their funds go toward a great purpose - this is the project - all you millionaires out there who want to help - this is a great place to put your name on a cause no one can dispute is worthy!

As we can see in the news recently, with the continued alleged use of chemical weapons - innocent civilians and particularly Syrian children are still in danger. This positive message needs to be advertised and film is a great medium to circulate positive messages regardless of race, gender, and even language.

My goal with both LOOKING INTO THE SUN and THE FINAL RESCUE are the same - bring awareness to the atrocities being done to Syrian children and then instigate positive action to help those innocents get much needed help until a solution to the regional conflict can be attained.

I will continue to work on this until this happens. I look forward to continued support from wonderful, caring people like Deepali Adhikary who choose not to ignore the situation - but meet it with positive effort and support.

On the lighter note - we have thrown around a few high profile actors to play the Hollywood actor co-lead - we have not yet approached them because the project needs a bit of money attached before those conversations can be had (the movie industry is a business) - but we have had a great time daydreaming about having actors like (in alphabetical order - not priority order) Bradley Cooper, Chris Hemsworth, Ryan Reynolds, and Channing Tatum. If anyone knows these guys, we'd like for them to call us... :-)

About the Author:- Todd grew up in San Diego, California where he enlisted in the Marine Corps in 1991. He served in the Marine Corps Reserve as an Infantry Scout and Light Armored Vehicle Crewman at Camp Pendleton, California, before he attended the U.S. Naval Academy (Class of 1998) where he earned a Bachelor of Science in History. After graduation, he was commissioned as an Ensign in the U.S. Navy and served as a Surface Warfare Officer onboard a supply ship stationed in Bremerton, Washington, before he was granted a transfer into Naval Aviation. He earned his Navy “Wings of Gold” in 2002 and flew both the MH-53E Sea Dragon and MH-60S Knighthawk helicopters. He earned a Master of Arts in Diplomacy from Norwich University where he studied Europe and the Middle East extensively. He also served with the U.S. Sixth Fleet in Naples, Italy (2011-2014), where he spent time studying international relations, global strategy, and regional conflicts throughout Europe and the Middle East. It was on this tour of duty that Todd saw the horrific toll the Syrian conflict was taking on innocent civilians, particularly, Syrian children.His research drove him to write his debut novel, LOOKING INTO THE SUN, to raise awareness and garner support for Syrian children. He and his publisher, Pandamoon Publishing, are donating a percentage of proceeds to Save the Children’s Syrian Children’s Fund.Todd is still serving on active duty in the U.S. Navy and lives in Virginia with his wife, Bonnie, and their two children. (Source:- https://toddtavolazzi.com/about/)