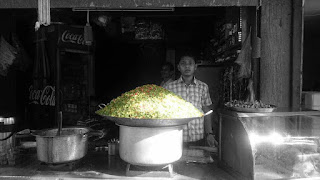 What is this procession papa?", asked Akash. Both of them had to halt their services as their customers rushed towards the pompous procession. There were huge speakers blaring bollywood numbers and a pretty girl with a mike saying something in English. Cameras were following the rich looking people in colourful clothes and dark sun glasses who had reluctantly stepped out of their air-conditioned cars. There were large screens displaying videos of expensive looking hotels.
Akash was stunned will all the mesmerizing extravaganza. He saw Pawan bhaiyya, one of his regular customers struggling with the crowd to reach Akash’s shop to have his poha, something which he had done for last so many years. Akash got busy preparing a plate of hot poha garnished with sev and chopped onions.
“People have gone crazy”, said Pawan grabbing his plate from Akash.

“Who has come Pawan Bhaiyya? Some filmstar?”, Akash tried to probe Pawan.
After swallowing a mouthful of sumptuous poha, Pawan replied, “ No. Not a filmstar. He is a chef. One who cooks in big hotels. He has many hotels across the country. He has now opened a big restaurant in our city. He is promoting that.”

“Will you go there Pawan Bhaiyya? He must be serving tasty food”. Akash asked innocently.
Akash laughed at his innocence and said lovingly, “No Akash, I will always come here for your Poha-jalebi”.

Just then the picture of the famous Chef was displayed on the big screen in front of them.
“Akash look, there is the chef. He is the one. People say that his dishes are excellent.”

Akash looked at the picture closely and called his father, “Papa, isn’t he the same man who had come last month asking for the recipe of Poha-jalebi and gave me a huge tip”.