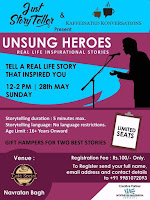 Inspiration comes in different forms. It can come in the form of friends who refuse to leave your side even in the darkest of times or it can come as an 8-year-old who did not let a deadly disease kill her spirit. This inspiration, in various forms, is all around us. But we seldom show our gratitude towards the source of inspiration that keeps us going. So when Kaffienated Konversations and Just Story Teller gave a platform to young writers and speakers to show gratitude towards their Unsung Heroes, they readily grabbed the opportunity and told stories that touched hearts.

“Unsung Heroes- Real Life Inspirational Stories”, a storytelling event organized by Kaffeinated Konversations and Just Story Teller encouraged people to tell a real life story that inspired them. The theme “unsung heroes” was carefully chosen by the organizers because in spite of the immense inspiration we draw from them, we often forget to show gratitude. They mostly remain unsung and unacknowledged.

In a time span of 5 mins, the participants had to present a story about their “unsung hero” in a language of their choice. While some chose to speak about a family member, others chose to highlight their friend or colleague. Irrespective of the language or the muse they chose, every participant spoke passionately and had the audience completely enchanted.

Justin Samuel from Indore is a mechanical engineer and on his way to pursue Masters of Design from National Institute of Design, Ahmedabad. Photography, writing, singing, debates and open-mics are just a few of his many hobbies.

Justin’s unsung heroes were his four friends who helped him sail through the toughest storms of life. He became nostalgic while speaking about his struggle with clinical depression and did not hesitate to accept that without those four friends, he wouldn’t be standing here today to talk about this.

Mohsin Khan from Indore is an educationist and runs a school. Having pursued MBA in marketing from UK, he is now back to his homeland to pursue his various dreams of writing, speaking and reading.

When Mohsin started narrating the story of his young cousin who fought bravely with cancer, the audience held their breaths. One could feel the agony in his voice of having lost his beloved sister. And when he candidly expressed that her liveliness and vigour even in the face of grimmest battles will keep him inspired always, there was a unanimous applause of admiration from the audience.

Jinesh Udani is a computer science graduate from Indore. He is a freelance content writer and likes to “wrestle and defeat the blank page”.

Jinesh’s unsung heroes were the ones who are making the world a better place, one book at a time. When he spoke about authors- renowned ones, lesser known ones and ones who were yet to earn that title, there were nods of agreement and appreciation from the audience as everyone in that room was in love with books.

Ankit Anand from Bihar has come to Indore to pursue BCom. When not crunching numbers for his balance sheets, he likes to write poems and recite them in open-mics.

The protagonist in Ankit’s story was an innocent young boy called Chotu. Orphaned by destiny, Chotu was left alone to fend for himself. But instead of taking short cuts, he chose the difficult but greater path of hard work to earn his livelihood and survived the brutal realities of life.

Ankit Nirmal from Indore has an engineering degree but his formulae and calculations are put to best use in his dance studio “The Dancennaire’s Yard”. His commitment to dance is closely followed by his interest in reading, painting and gardening.

A humble gardener who worked 12 hours a day with just his Bhojpuri songs, that he hummed incessantly, to keep him company became an inspiration for Ankit. If a gardener can find joy in something as monotonous as sweeping the garden and watering the plants, what could possibly stop him from following his passion, said Ankit.

Ananya Jaiswal, a young architecture student from Rewa is a gifted artist. Her black and white sketches speak more than any colourful painting. She indulges happily in reading, writing and dancing.

Ananya’s friend was molested in the confines of her home by a man who should have been her shield against the cruelties of the world. But instead of losing hope and surrendering to fate, she decided to use education as her weapon. She is striving hard to study to become independent. A tear in the corner of Ananya’s eyes was enough to prove the pain she felt for her friend and why she chose to speak about her.

Shubham Jain is an electrical engineer from Dewas. But his degree could not keep him from following his passion. A mythologist, a poet, a writer and a story teller are some of the hats that he wears proudly.

Who likes to an over-protective father? Who likes questions like “where are you going” and “when will you come back”? Nobody does. Still a father asks these questions out of concern. Even when he knows that he is just an “ATM card” for his adolescent son, he continues to do everything selflessly for his child. And you realize that he was the unsung hero of your life only when you become a father. Shubham used his extraordinary oratory skills to narrate this story passionately and garnered immense praise from the audience.

Ankit Shrivastava from Ujjain talked about Pallavi and her efforts to educate the lesser privileged kids around the university campus. What started as a hobby has now become a serious engagement and calls for support from as many hands as possible. At an age when students’ life revolves around movies and fashion, Pallavi and her friends have chosen to tread on a difficult path.

Shivangi Pavya from Chattarpur is a second year engineering student. The multi-talented Shivangi has a keen interest in mythology and philosophy and likes to read and write in her free time.

Shivangi’s unsung hero was Veenu, son of Haridas and Savitri. Young Veenu wanted to study but destiny wasn’t in a mood to fulfill his wishes easily. Born in an extremely poor household, Veenu had to struggle hard to keep studying. And ultimately, destiny had to surrender. Veenu grew up to become a renowned educationist who is known for knowledge as well as humility.

Though each of the participants made a mark with their passionate story-telling, Jinesh Udani and Mohsin Khan stood out as winners in the event. They won gift hampers from Kaffeinated Konversations, Just Story Teller and Readomania.

The moments were captured on camera by the enthusiastic duo- Jatin Gera and Tanuj Dalal from CreativeClicks. They also engaged the audience in a social experiment related to feminism and its side effects. The experiment called for views from the audience about the subject and the energetic people were happy to participate.

The event was organized at Café Social, Navaratna Bagh, Indore. Sudeep Garg deserves a special mention for being extremely cooperative and enthusiastically involved in the execution.

Follow them on social media to find out about upcoming activities and be a part of some exciting events. 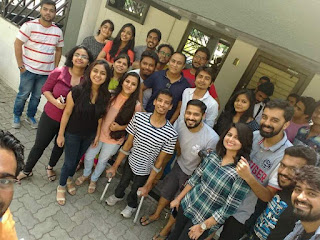