Showing posts from August, 2017
Show All

70 years- Too Young to be Perfect? 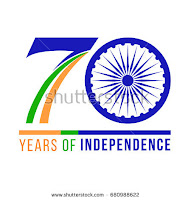 #IndependenceDay In a couple of days, India completes its 70 years of being independent. 70 years is a long time and the country has come a long way since 15th August 1947. From being a poverty-stricken nation holding on desperately to its rich culture to sustain, to being one of the super powers of the world today, She has seen pretty much everything. More than a couple of wars and an intermittent pseudo-war both at the border and within during these years have put her at constant risk. But She continues to strive ahead. There are mistakes being made, there are battles being lost but then she is only 70 years. Isn’t it too young for a country to be perfect?
Post a Comment
Read more
More posts